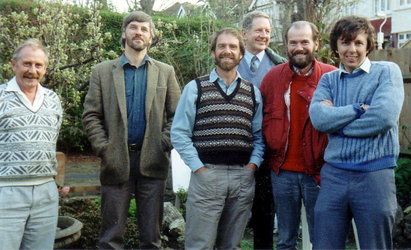 Founding members of SBRC in fresh Spring plumage, April 1992:
In April 1992, a group of ornithologists met in London to discuss the avifauna of Seychelles and the need to assess the veracity of bird reports in the country, producing a definitive Seychelles list.  Seychelles Bird Records Committee (SBRC) was formed and annual meetings have been held since then either at the Natural History Museum, Tring, UK or by conference call. This is an opportunity to discuss matters including the more difficult records and (at Tring) to consult the museum’s extensive skin collection and library. However, most of the work of assessment is done throughout the year by circulation of records received from observers usually supported by a record form.