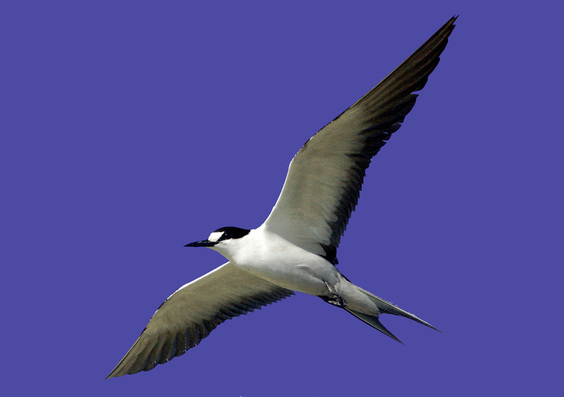 Sooty Tern: Ringed birds have been recovered from as far afield as India, Sri Lanka and Australia. Photo: Adrian Skerrett

The following is a summary of all known recoveries to or from Seychelles of ringed or satellite tracked seabirds and migratory species.

Kermadec Petrel Pterodroma neglecta
A sighting of an intermediate morph bird at Cousin on 29 August 2003 by Thor Veen and Cas Eikenaar was the first record for Seychelles. What is presumed by SBRC to be the same individual was captured and ringed by Cas Eikenaar on 29 June 2004. The bird was recovered and released again at Cousin on 13 August 2006.

Red-tailed Tropicbird Phaethon rubricauda
A bird ringed by Tony Diamond at Aldabra on 8 August 1986 was recovered on 4 July 1997 (10 years 11 months later) at in the same location on Aldabra by Roselle Chapman.

Eleonora’s Falcon Falco eleonorae
A ring (but no corpse) found at the airstrip, Alphonse on 12 December 2009 had been applied to a 1st-year at Las Islas Columbretes, Spain on 17
September 2008.

Spur-winged Plover  Vanellus spinosus
A bird present at Bird Island 17 November to 15 December 2010 was ringed by Kevin Jolliffe. This was accepted by SBRC as the first record for Seychelles. What was almost certainly the same individual as it bore a ring, was present atLa Promenade, Mahé 28 December 2010 to 6 April 2011.

2.  A first year ringed by John Phillips on Cousin on 3 November 1982 was recovered as an adult on 10 August 1986 on the Lower Sarysu River, 100 km north-east of Kyzl-Orda Town, Chimkent, Kazakhstan, a distance of 5,332 km from the ringing  site, by CS Waller. A further ring was added prior to release.

Sooty Tern Onychoprion fuscatus
Chris Feare has now ringed over 24,000 Sooty Terns in Seychelles since 1972. Over half of these were ringed on Bird Island, with significant numbers also on Desnoeufs, Aride and Cosmoledo, and others on African Banks, Farquhar and Récif. A relatively small number of these have been recovered away from Seychelles (see below) but during searches on Bird Island between 1995 and 2010, over 3,000 of these ringed birds have been re-caught. Some of these were birds originally ringed in 1972-73, and in 2006 sixteen 33-year-old birds were caught. These resightings indicate that Sooty Terns in Seychelles are generally very faithful to their breeding colonies but human disturbance and changes in food distribution sometimes stimulate adults to switch colonies. On
Bird Island, birds ringed on Desnoeufs, African Banks, Aride, Récif and Cousine have now been recorded. One bird ringed as an  adult on Bird in 1994 was re-trapped nesting in 1999 on Desnoeufs and then found again breeding on Bird in 2000. In 2010, six new birds that had been ringed on Desnoeufs were seen for the first time on Bird Island, suggesting increased disturbance on Desnoeufs. A Sooty Tern ringed as a chick by Gerard Rocamora at Desnoeufs on 15 July 2000 was recovered by George Marie on 16 June 2016 as a breeding adult. On 20 July 2020, Sophie Morel reported finding a ringed Sooty Tern at Bird Island; it had been ringed 26 years ago in June 1994 as an adult of at least 5 years, making it a minimum of 31 years of age.

Away from Seychelles, recoveries are as follows:

5.    An adult ringed at Aride by Chris Feare/Elaine Gill/Peter Carty on 30 June 1995 was recovered on 13 May 2011 (therefore likely to be at least 22 years old) at Anawilundawa Puthlam, Sri Lanka, a distance of 2,985 km. The bird was sick (fowl cholera, also known as avian pasturellosis Pasteurella multicoda,bacteria were isolated) and later died.

In addition to these birds that were ringed in Seychelles, a bird ringed as a chick on 19 December 1961 on Raoul Island, Kermadec Group, in the Pacific northeast of New Zealand (29º15’S, 177º55’W), was found breeding on Aride island on 30 June 1995. This 34 year old bird had moved 13,750 km from its natal site where the population has declined markedly due to rat and cat predation.

Geolocators recovered from Bird Island Sooty Terns have revealed four concentrations of the Indian Ocean used by birds during migration, (i) the Bay of Bengal and waters around Sri Lanka, (ii) an area straddling the Chagos-Laccadive ridge to the north-east of Seychelles, (iii)  an are straddling the 90-east ridge to the south-east of Seychelles, and (iv) an area south of the Comores in the north of the Mozambique Channel. One individual made a particularly long distant migration: after foraging on each side of the Ninety East Ridge, it visited the Banda Sea between Borneo and New Guinea at the border of the Pacific Ocean and returned to Bird Island for a new breeding attempt after travelling 65718 km. Sensors on the geolocators confirmed that during the non-breeding season Sooty Terns have little or no contact with either sea water or land, spending the vast majority their time airborne.

Bridled Tern Onychoprion  anaethetus
1.  An adult ringed by Tony Diamond on Cousin on 22 May 1973 was caught and released on 13 May 1974 by Jae Kyu Kim of Korea, a fisherman, off Pemba Island.

Roseate Tern Sterna dougallii
1.   A bird ringed by KW Smith on Bird Island on 13 July 1998 was recovered on 10 August  1986 on Denis Island, a distance of 48 km from the ringing site, by C  Sarginson in an exhausted condition, unable to fly with a tick on one foot.

Acknowledgements:
Thanks are due to all ringers credited in the individual entries and to the British Trust for Ornithology for the supply of information held in their records.